Every year, I notice it’s coming up to Halloween on about the 10th of October and decide to schedule an appropriate photoshoot and a “top picks” collage from designs for Eustratia.

This year, I decided to be a bit more pro-active and post my selections early. This gives you guys more time to think about your outfit and also coincides with the mini SALE I’ve just put on for the remainder of the week! (but obviously you’d have to make up your mind quick for that, end midnight on Saturday GMT).

I’m not really into items that I see as tacky, or anything that is specific to a particular character, though I do love dressing up. I prefer to choose items that can make an impressive addition to a costume, but are versatile and can also be used in other situations. 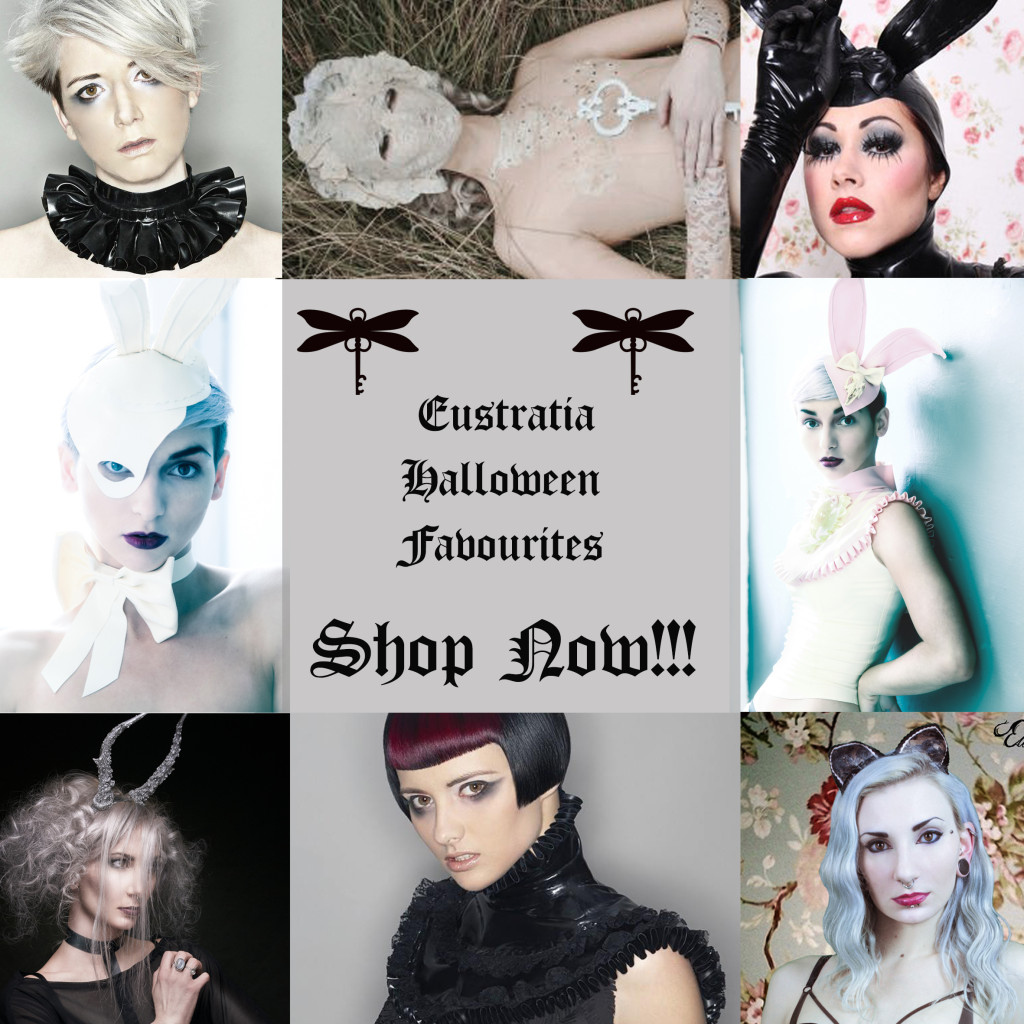 Here we have a few examples of items I have incorporated into past costumes but continue to come in useful today.

and the kitty ears.

These are just some easy options I picked to save you looking through the whole website, if you have some spare time though, there are plenty more wonders in the sale section. Harnesses of any type are also a great choice in my opinion. They give a distinctive “tough” look that can also be toned down enough to wear every day, with the right outfit.

If you have something extra special planned and nothing on the site will quite do, I’m always happy to take on custom commissions and I will offer 20% off those until Saturday. That includes crowns, horns and hair covered, sculptured head pieces that you may have noticed in some of my work.

To give you some inspiration, here are some of my costumes from previous years that I’ve been photographed in: 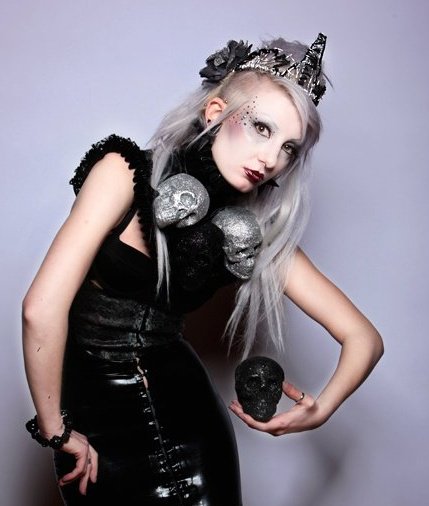 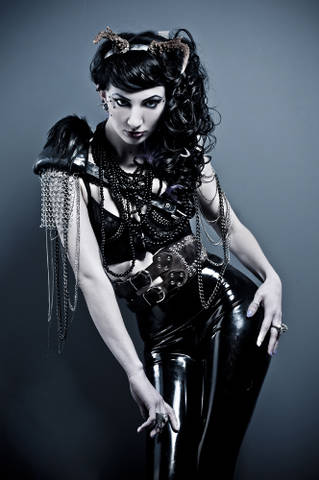 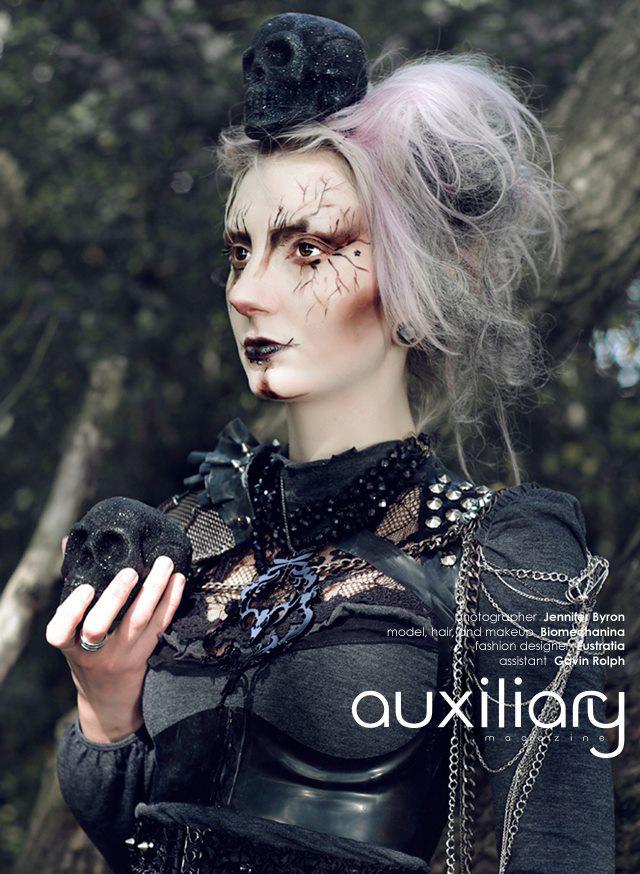 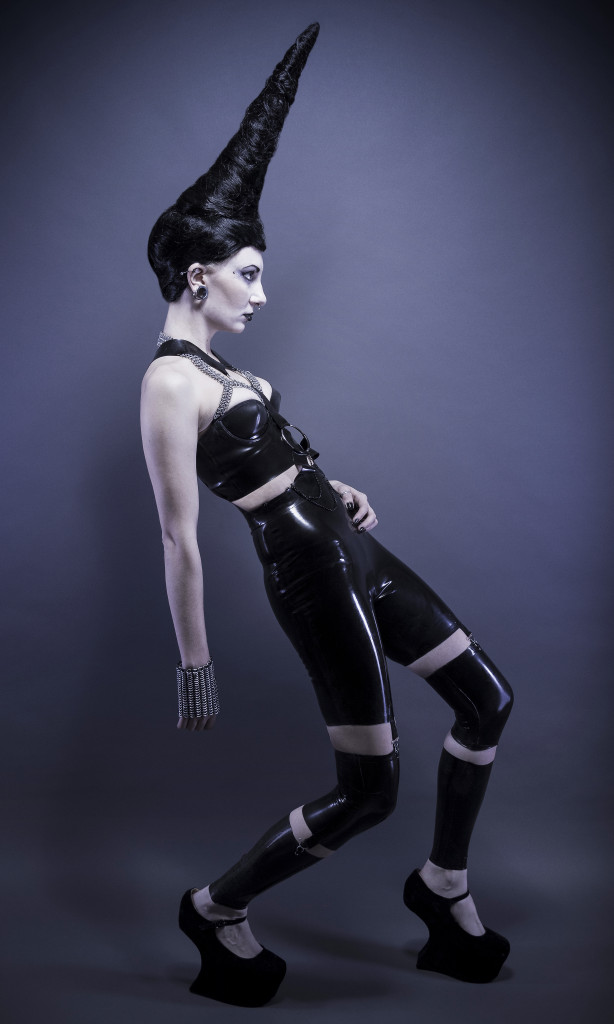 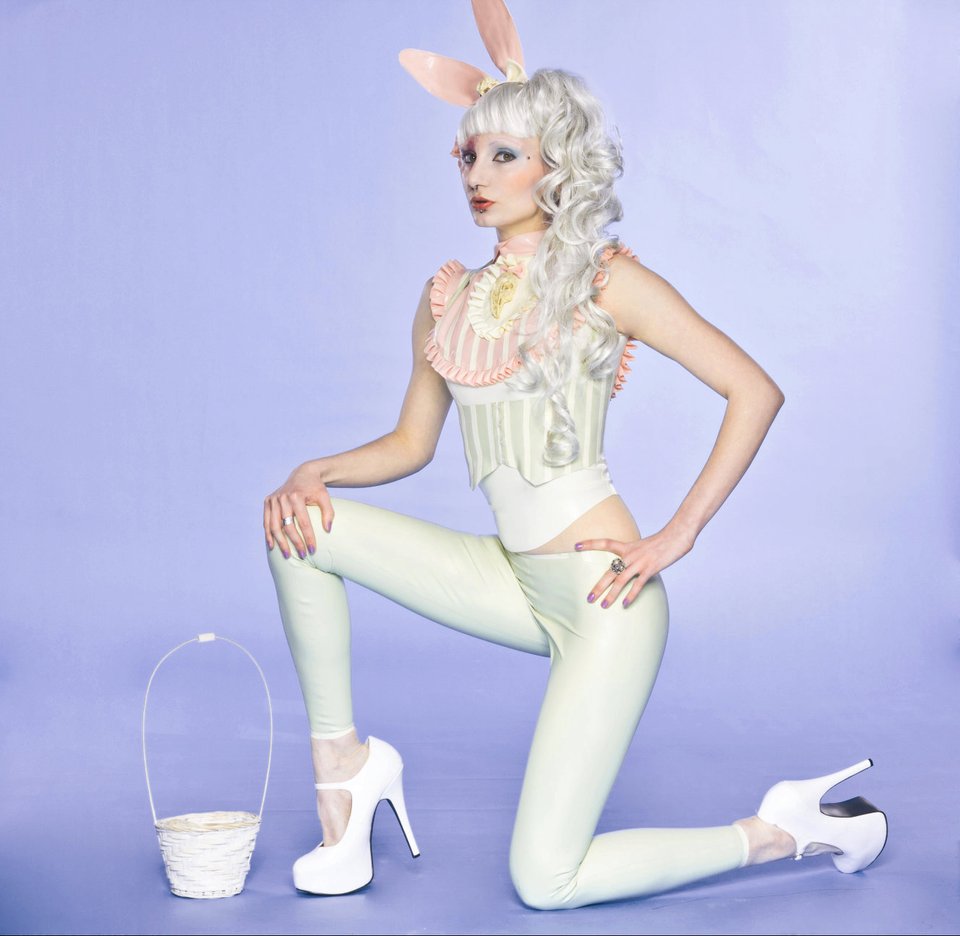 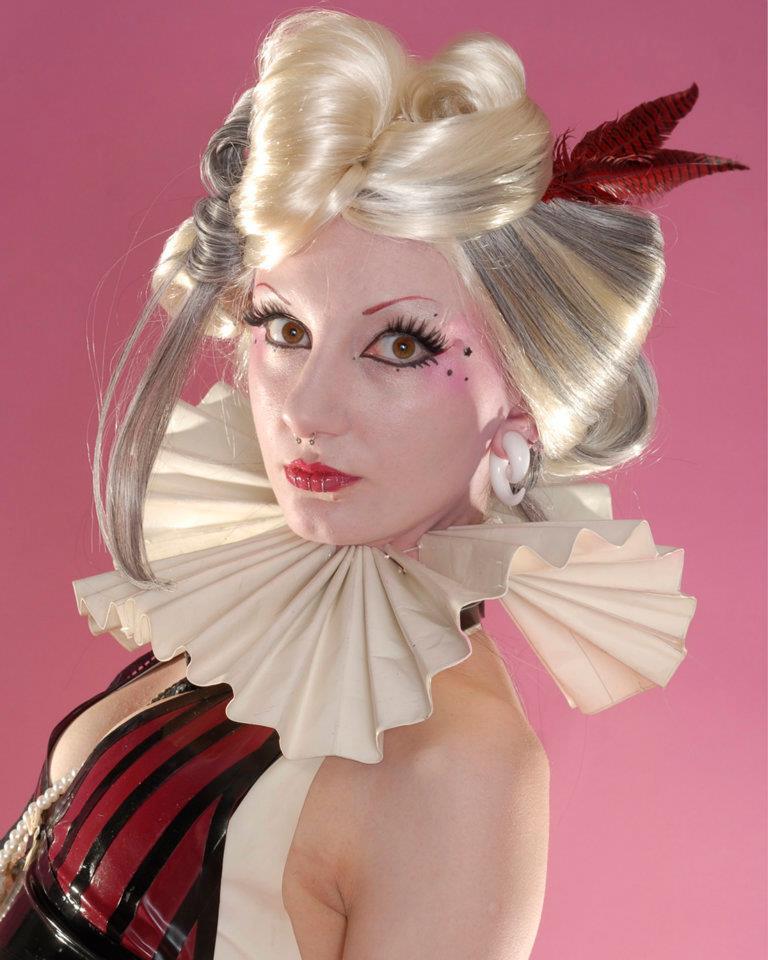 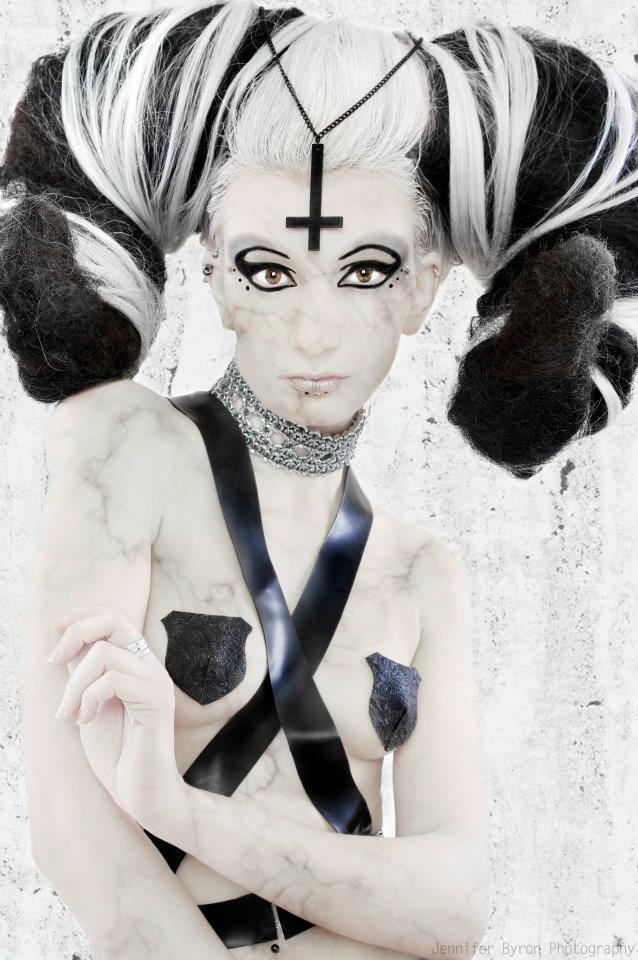 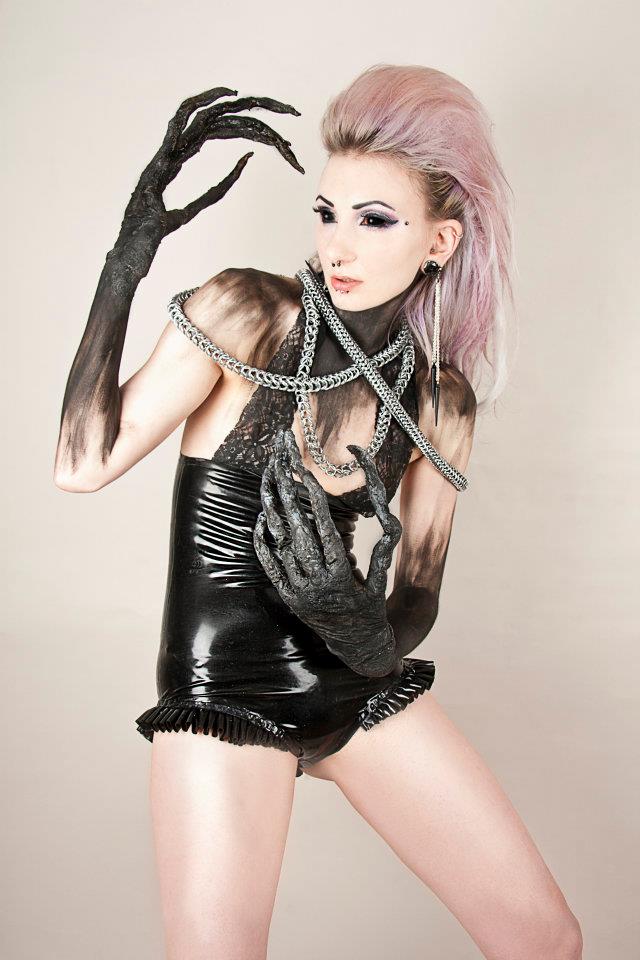 A few of these are a bit old now, but I hope you enjoy looking at them all the same.

Halloween is fast approaching and though I’m not a fan of tacky costumes I know how fun it can be to dress up or get into character for an evening.

I don’t make specific Halloween items as such but I do offer items that would make a great addiction to your outfit while still being able to be used for different occasions.

I’m also offering custom, latex covered masks. Here are some foxes I made for a shoot earlier in the year. For more info or a quote, comment here or email enquiries@eustratia.co.uk

The first Eustratia fashion show of the year took place at the Club Lash relaunch at its new venue, Alter Ego.

Club Lash is Manchester’s longest running fetish club and also the first fetish club I visited, shortly after I turned 18. The atmosphere is friendly and relaxed and the club caters for players and clubbers alike, especially with the larger dance floor the new venue offers. My favourite new addition were the silky kimonos made available to smokers while they stand outside, I think this practice should be adopted by all clubs that encourage skimpy or unusual dress.

Though I like the venue on the whole, the stage is quite small and there is no dressing room so I had to make some change to my usual repertoire. Some male friends helped us close off the toilets for a few minutes so the models could get dresses and I made the show quite simple, with emphasis on the models and outfits.

Unfortunately we weren’t able to get a video but the official club photographer took some snaps for us.

For anyone who is interested in the outfits showed at this event, they are all available from www.eustratia.co.uk

I don’t always have time to update as often as I’d like but I do try to keep things more or less in chronological order, this sometimes causes me to fall even further behind because I find it hard to publish a particular post. This is one of those posts, I have thought about what I wanted it to be like for ages because I was searching for a more refined and straightforward way to present my personal personal projects but I guess I’m not quite there yet.

As I have mentioned previously, this winter I was very inspired by wintery imagery, white animals and snowy settings. I really enjoyed gathering inspiration for the Eustratia winter wonderland shoot so when a show slot came up at the Manchester Alternative and burlesque fair, I jumped at the opportunity. I never usually plan seasonal seasonal stuff in time but my general love of animal-inspired headwear and white latex came in useful here.

This was my main inspiration board.

I wanted to tell a story and I left it would come across best if the setting was right so the props were important. The main part of the story takes place in an enchanted forest so trees were essential, I’ve wanted to have something like this on set for ages so I ordered some foam board and thanks to the efforts of the multi-talented Richard Ayres, it was made possible. I think he will aslo need a prop portfolio soon.

I also purchased a snow machine, which I think made all the difference, a large mirror, some small animals and hanging stars to complete the scene.

With the event being so close to Christmas I wanted to add some traditional elements into the story, unrecognisable as they may be. I stumbled upon the story of Befana, the Italian, gift giving witch. I loved the fact that as well as putting sweets into the boots of “good” children she also took time to sweep the floor while she was there, utilising her witch broom to show she was a good housekeeper. I decided to put her in the show but I totally changed her appearance to fit in with my aesthetic.

My decision to add this traditional element along with the girls starting of in the real world and journeying, in a dream, to the enchanted forest made the execution slightly more complicated. I was determined to make it work because it was the most unique part of the show and I left it gave more depth to the story.

The final narrative was as follows:

It is the night before Christmas. 2 girls go to bed in their room, excited for what the next day might bring. They have just fallen asleep when they hear a tinkling sounds coming from the mirror. The one nearest gets up and notices she can go through!

Once through the mirror the two girls find themselves in a winter wonderland, they are wondering around in awe when they meet a witch. She is gathering flowers in a basket and the girls decide to help her. To thank them for their kindness the witch gives them a magic coin that they can use to call upon her whenever they need help.

Next the girls come across winter woodland animals, dancing between the trees, they are transfixed and watch the graceful dance until their attention is drawn away by a loud noise. The snow queen and her extravagant pet unicorns approach the animals and circle menacingly. The queen decides to turn the animals into ice statues so she can admire their beauty whenever she likes, then they leave.

The girls come out from hiding behind the trees and are sad to see the animals cold and motionless, then they remember the coin and decide to use it to help the animals, they throw the coin into the air and surely enough shortly after the witch appears, she gently touches each animal and breathes life back into it. The animals have been turned back to normal and it starts to snow, everyone frolics happily.

The witch then leads the girls back through the mirror and into their own room. She puts them to bed, leaves glitter in their boots and sweeps the floor before leaving. The girls awake on Christmas day to find the glitter in their boots, a magical reminder of their journey to the winter wonderland, they are happy.

The staff and broom were made for the show by Madame Dee’s creations.

Some stills from the show:

You can view more images from the show and info about the models on the Eustratia facebook page.

I’m quite happy with the way the show turned out despite the technical difficulties we had on the day. I’m grateful to everyone who contributed/took part and I think the models did an especially good job considering we didn’t get to rehearse with the props in place. Visually, I wish there was a white or generally light coloured backdrop, I think it would have really added to the set. It isn’t majorly important but I think it’s helpful for myself to make a note of such things because it isn’t something I would normally think about before planning a show.

Though it was a latex fashion show, I mostly enjoyed experimenting with different textures and making the non latex items. I had lots of fun with the fake fur, a material I’ve never used before. Of course I had to try on all the silly animal headwear!

I’m late writing this post (as with most of my posts), but I needed to share this magical project.

Winter themes really inspired me this year and I wanted to bring together elements from fairy tales, wildlife documentaries and fashion in a shoot.

This was the second project I shot in collaboration with Katelizabeth photography who came to Manchester for an intense couple of days of almost constant shooting. She did a great job re-arranging the set, directing the models and editing the finished images and was a total pleasure to work with. I’m sure she will be up to great things in the future.

The point was mainly to show off my creations for Eustratia but I styled it with some wintery items from my personal collection as well as some specially made headpieces to complete the look.

I bought the props mainly to use in an upcoming show with a similar theme but I think they really made the set, Kate did a great job of arranging them as well!

And for those of you who don’t know, this in my beautiful friend, Amber AKA Sapphire Black, if you follow my work you will have seen her before.

I particularly love this images because of the composition and the fact that it shows the whole set. I had been searching for a new front page image for www.eustratia.co.uk for a while and I decided to use this one.

I also made the headpieces for this shoot, which gave me a welcome break from working solely in latex. I have made antler headbands and bunny ears plenty of times before but the crowns were definitely something new for me and I really enjoyed working on them. I hope to have time to work on more special pieces and props this year. One of my goals is to create as complete an image as possible through my shoots and to keep my personal projects as close to the original idea as possible.

The wonderful make up in the images was provided by Laura Wilson. She is super talented and I hope to collaborate with her again this year. One of her best qualities is being able to realise somebody else’s vision as well as just her own, I find a lot of MUAs have a problem with this. She can also work well with different styles of make up while still retaining her signature.