I started the season hobbling to fashion scout with all my luggage and just managing to usher Toria Brightside in before the doors closed, as she stumbled out of a car and up the stairs.

I’ve realised we give new meaning to many phrases, including “Fashionably late”. 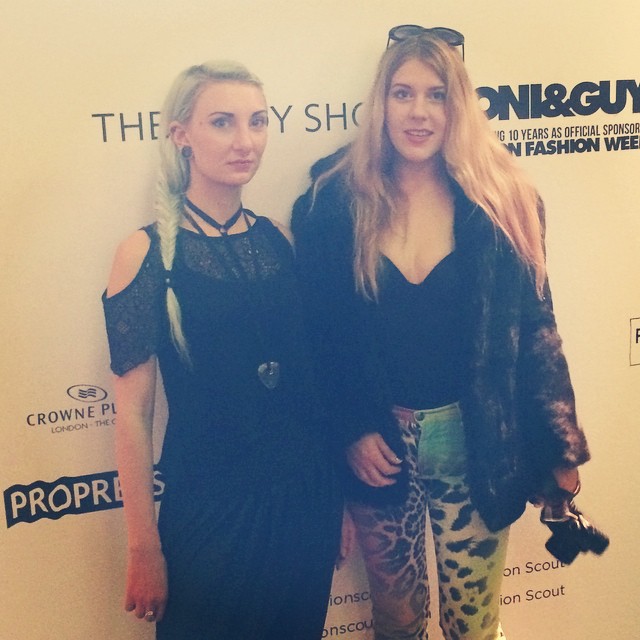 Our first show was Jamie Wei Huang, a designer we’ve been following for the last 3 seasons. 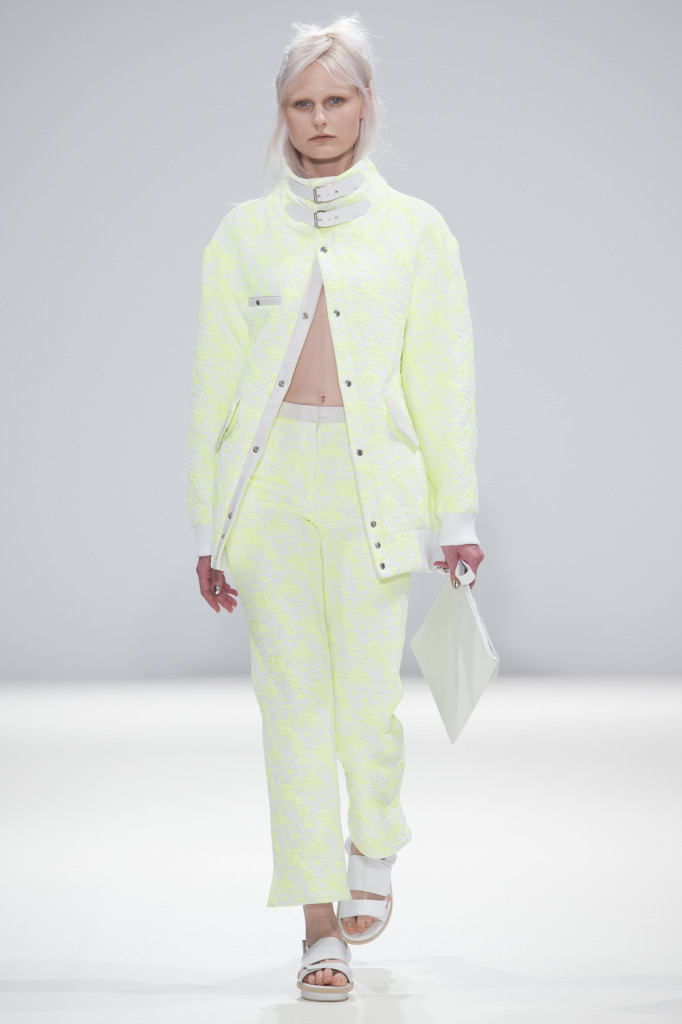 Continuing in the vein of her fascination with “urban societies”, her S/S collection featured oversized pocket and strap details and a multitude of sportswear influences. 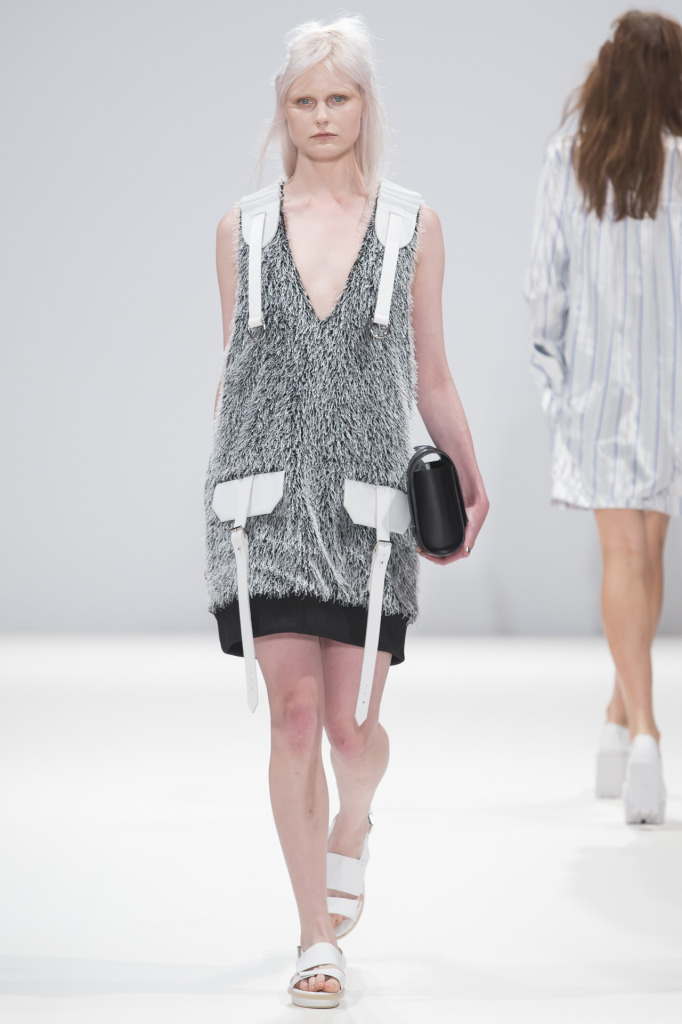 This time, she incorporated lighter fabrics and colours that juxtaposed the details and brought it all together into a sophisticated, utilitarian-luxe. 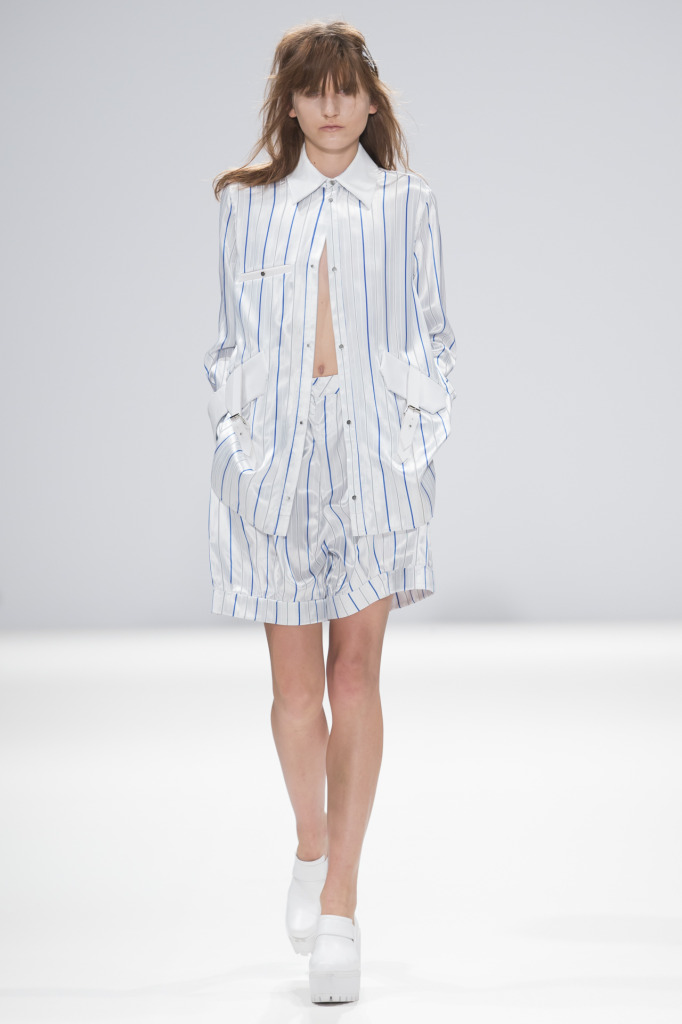 The beautiful airy satins , reworked varsity jackets and soft textures stood out most to me and I feel like this is a collection you can wear anywhere.

The concept of stylish comfort seems to be resonating with designers more and more as busy schedules have us running around without time to change throughout the day and Jamie Wei Huang has definitely mastered it. 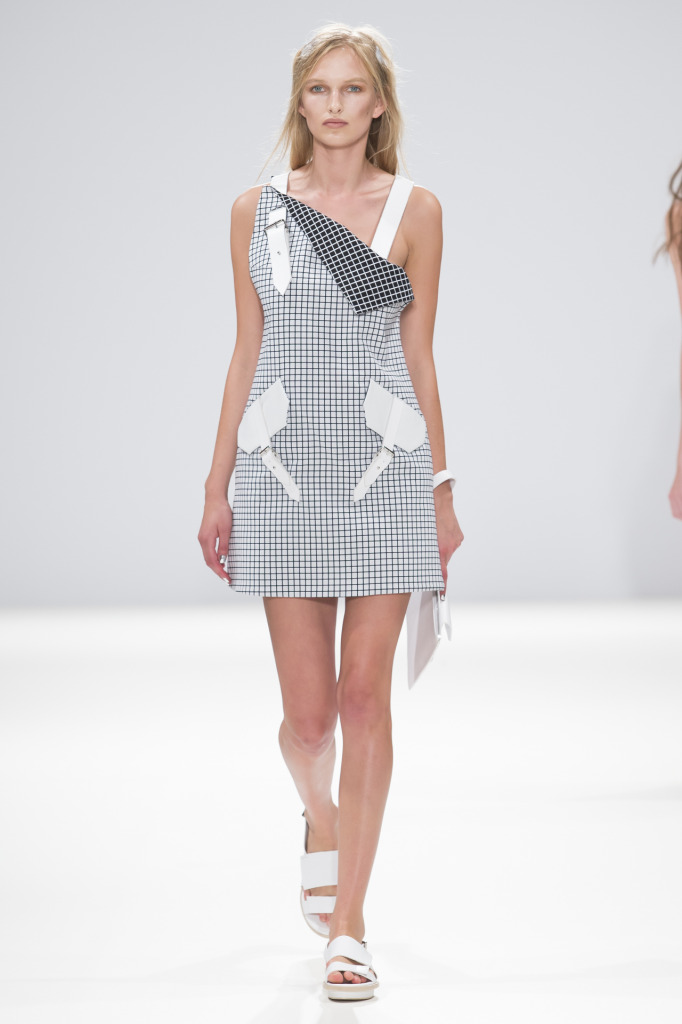 After a short Champagne break and visit to the showrooms (which I will feature in a separate post) , we returned to Fashion scout for another show.

Ashley Isham stood out straight away, with his unusual catwalk set up that allowed models to appear out of nowhere and make movements other than the usual catwalk strutting. The collection was inspired by Mata Harry, which prompted him to incorporate elements from her dance  routines into the show. 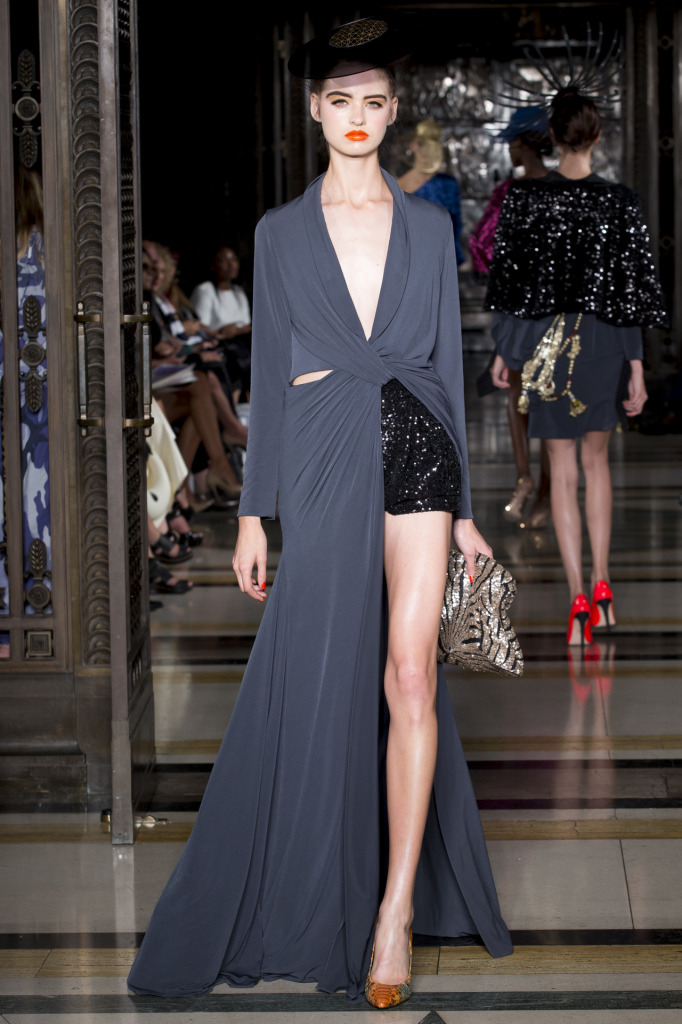 The collection was dominated by dramatic, flowing garments featuring twists and gathers, that were pulled aside to uncover embellishment or cinched tightly with patent leather harnesses and belts. 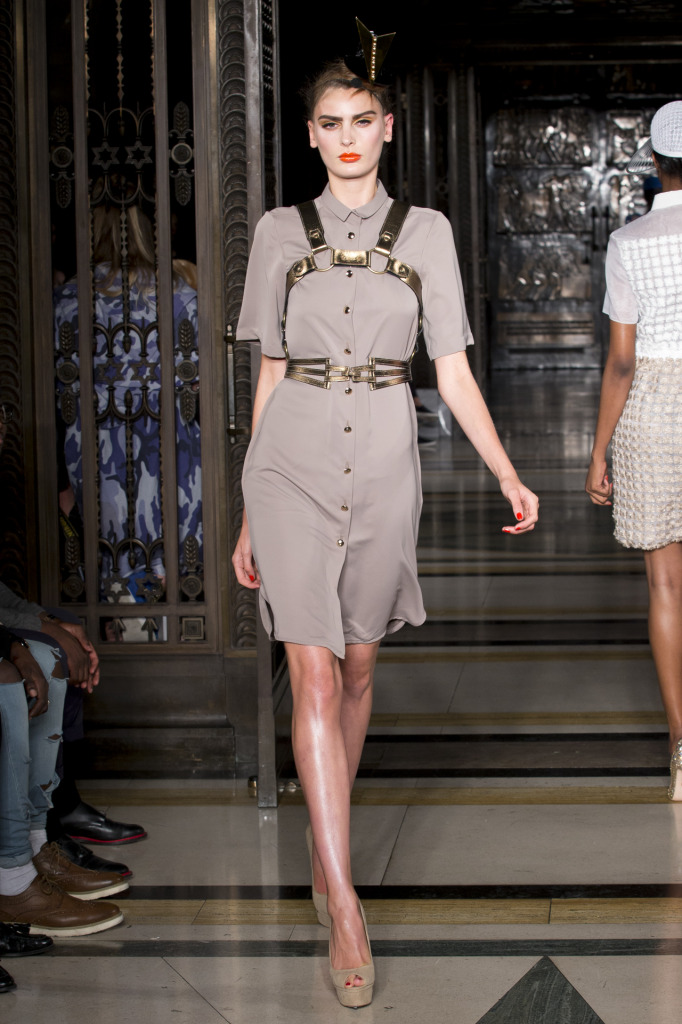 The model’s heads were adorned by otherworldly visors and metallic perspex arrow fascinators that complemented or contrasted with the outfits.

On the whole, the collection was an austere yet elegant mix of turn of the 20th century chic and  modern detailing with an eloquent finishing touch, presented in a vibrant show that captivated the audience. 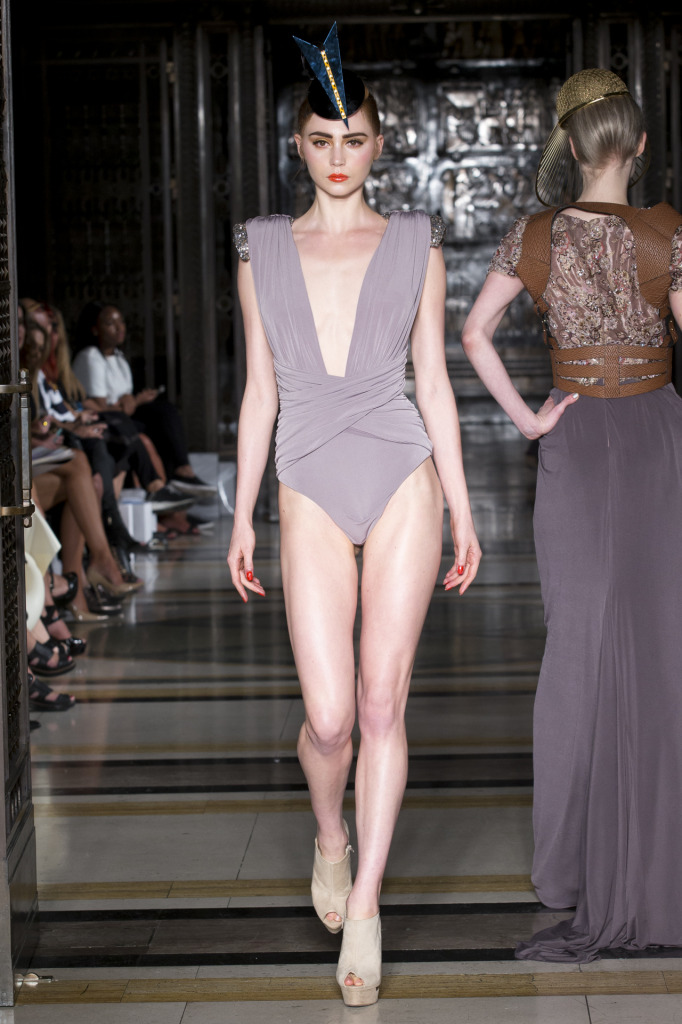 To top it all off, each garment is hand-crafted in England, which is definitely something to be proud of in today’s fashion industry.

After the shows, we attended the Dash magazine party, where the guys from Heavy London were DJing as colourful furry monsters by Bas Kosters danced around the room. 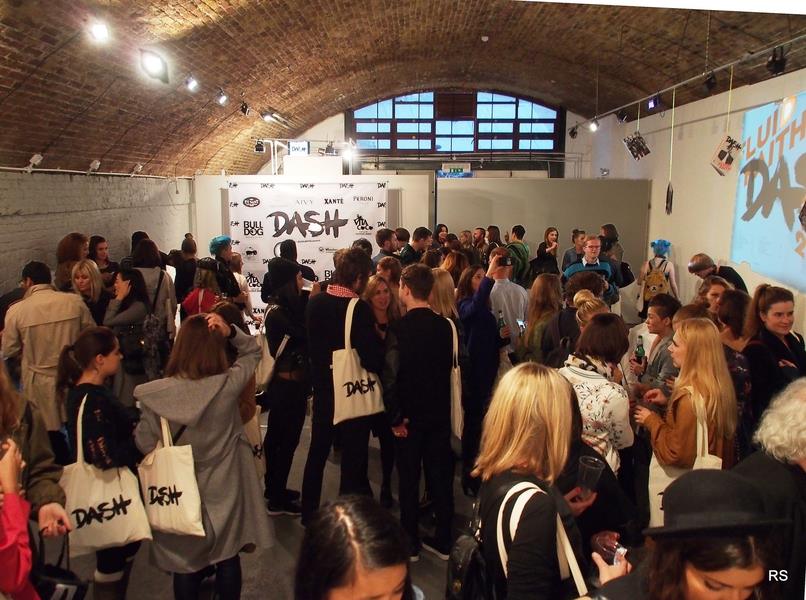 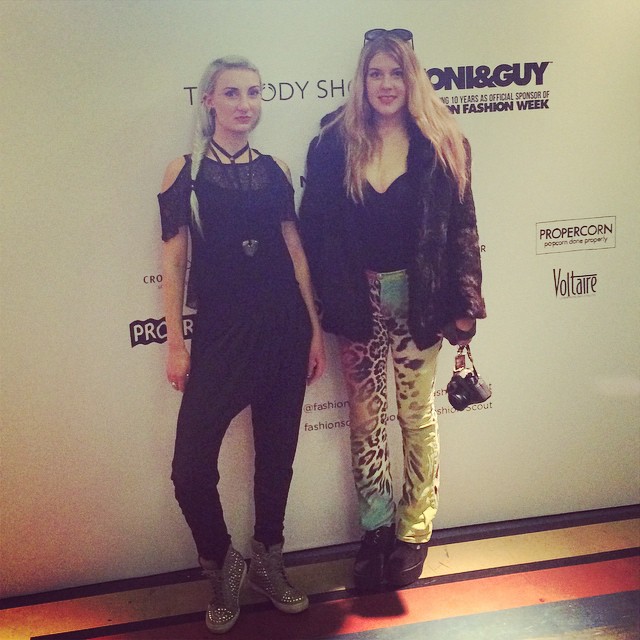